This series of posts will describe the process of deploying a NXOS Leaf and spine fabric in a declarative manner using Ansible. This came from my project for the IPSpace Building Network Automation Solutions course and was used in part when we were deploying leaf and spine fabrics in our Data Centers. I originally only planned to build tenants and do fabric validation but over time this has morphed into a full blown fabric deployment.

Rather than a few very long posts I have split this up into more manageable shorter posts which follow the build process and hopefully give some scope into how the project has been constructed.

Prior to the IPSpace course I had never touched Ansible so using it solely for this project was good way to properly learn and evaluate it. I like the structure of it and the use of roles is a good way to modularize it and keep your playbooks clean. Ansible is not capable of the level of programmability I often require so I spend half of my time first piping the information through jinja plugins (python). That is good in a way as it adds a level of separation and stops one python script or Ansible playbook getting too big and complex.

If an Ansible module already exists for the tasks you want to perform it greatly simplifies it as all the hard work in making it declarative has already been done for you. The problem for me with the modules (the reason I didn’t use Ansible network modules) is that you can not properly combine them under the one task so that when the playbook runs multiple modules look to be the one tasks. You can use blocks to join them in the playbook but that still doesn’t cut down on the onscreen noise when each module is run. It sounds like it is possible to tidy it up a bit using callback_plugins but it would be nice if this was an out-of-the-box feature.

Troubleshooting can be very slow and painful with Ansible, is a real nightmare at times. Wherever possible I try and build the code in other systems first and then add the finished result into Ansible to try and avoid as much Ansible troubleshooting as possible. This should not be the case, if you are using a framework to deploy code you should be able to easily troubleshoot within that. The other thing I need to look into that this project is missing is unit testing the playbooks. I would have thought it is possible but haven’t investigated it properly yet.

The goals and design decisions for this project were the outcome of the best practices and recommendations learnt from Ivan’s course.

For the solution to be truly declarative the whole configuration needs to be replaced rather than merged. This process is full of highs and lows, when it works it is God like, the simplicity of changing something like a route-map name or AS is unreal. However the lows when it fails, the endless days banging your head against a brick wall and questioning if it is all worth it.

I have only tried this with NXOS and the experience has been a bit hit and miss. To deploy in a production environment you would certainly need that whole devops orientated CI/CD lifecycle. A perfect example is code upgrades, even the silliest simple hidden command snuck in between code versions will break the declaration. The error output from NXOS deployment failures is not as intuitive as it should be, feels kind of like an after thought rather than the OS built around this idea. I would be interested to see how other vendors handle this.

It feels like a truly declarative network is a long way off with the current equipment, tools and skill sets. This is just my opinion from the experiences I have had, I don’t use automation as part of my everyday job or have extensive vendor exposure. In the cloud environments or devices with an OS built for it I can see how it could work, but when you are replacing whole configurations for complex solutions (not just a campus access switch) there are so many pitfalls if the slightest command is wrong. I guess that is maybe why people go for pre-built vendor solutions, but then you have that other problem of vendor lockin.

The fabric deployment is structured into three main categories, with the services split into three further sub-categories.

Each category is a role that hold the plays, templates and filter_plugins specific to them. Variable files are stored in and loaded from the main playbook. There are separate variable files for the base and fabric categories as well as for each of the service sub-categories.
Each role is independent of each other with the idea being that all or a specific combination of these roles can be deployed. However there is a logical hierarchy, for example you cant configure interfaces without first building the tenants.

This deployment will scale up to a maximum of 4 spines, 4 borders and 10 leafs, this is how it will be deployed with the default values. 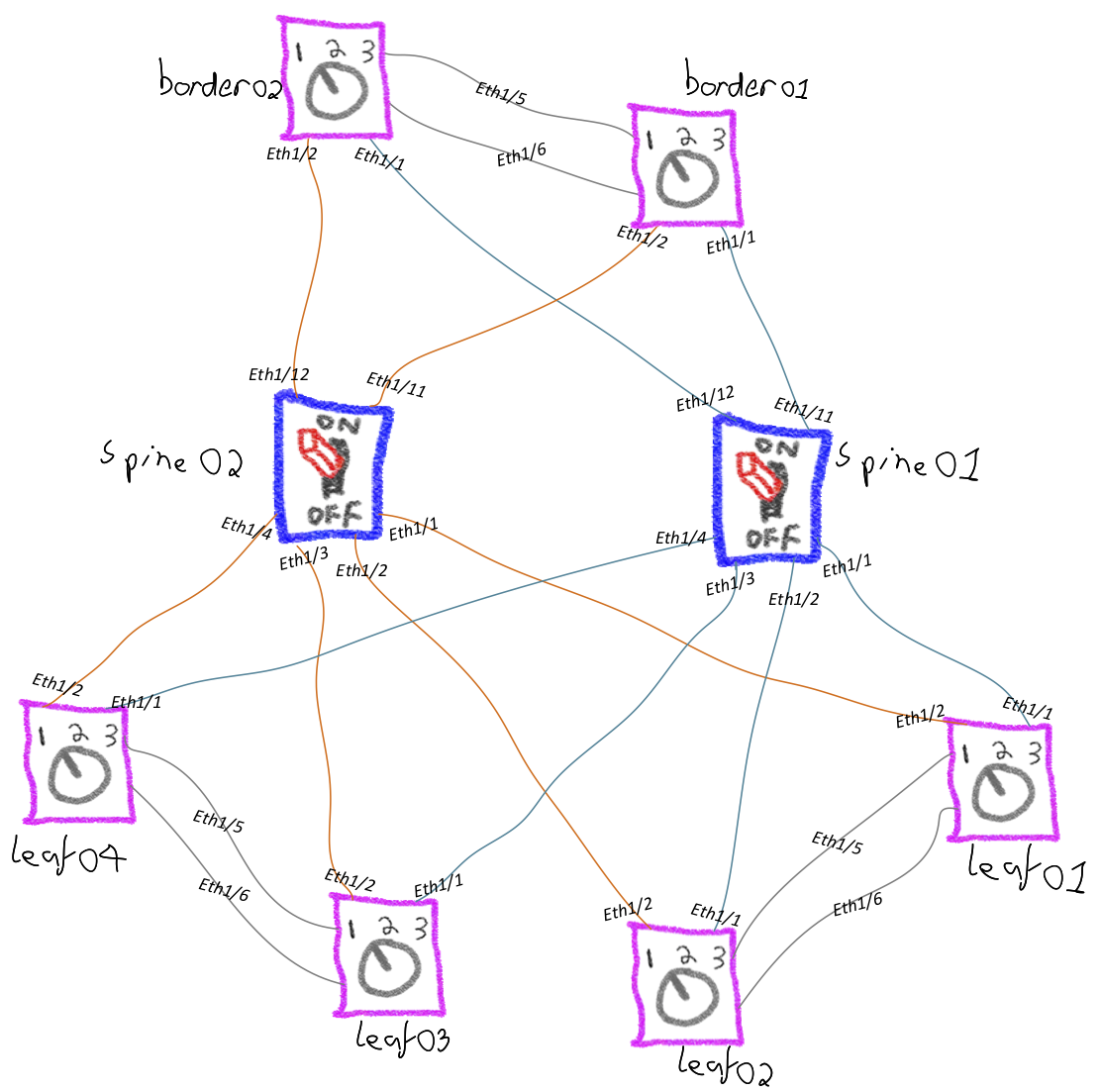 The default ports used for inter-switch links are in the table below, these can be changed within fabric.yml (fbc.adv.bse_intf).

The playbook structure (PB_build_fabric.yml) is best explained by looking at it from the different sections

Post-validation was originally within post_tasks of PB_build_fabric.yml but is better suited to its own playbook (PB_post_validate.yml)

The concept of a ‘Node ID’ is used to automatically generate unique device names and IP addresses for the different device types (spine, leaf and border leaf). For example, leaf1 will have a node ID of 1, leaf2 an ID of 2, spine1 an ID of 1, and so on. This is added to the base name format (bse.device_name) to form the unique hostname for that specific device-type.

IP address assignments work in a similar manner but with the addition of an address increment (fbc.adv.addr_incre) for uniqueness between device-types. The node ID and address increment are added to a base address range (bse.addr) generating unique device IP addresses. Different address ranges and increments are defined for the different interface types (loopbacks, management and MLAG).

There is a variable file for each role and role-task which are imported into the main playbook using vars_files. To make it easier to identify within the playbooks and templates which variable file a variable came from are variables from that file are preceded with an acronym.

Pre-task input validation checks are run on the variable files with the goal being to highlight any problems with variable before any of the fabric build tasks are started. A combination of ‘Python assert’ within a filter_plugin (to identify any issues) and ‘Ansible assert’ within the playbook (to return user-friendly information) is used to achieve this. The pre-validation task checks for things such as missing mandatory variables, variables are of the correct type (str, int, list, dict), IP addresses are valid, duplicate entires, dependencies (VLANs assigned but not created), etc.

The directory structure is created within ~/device_configs to hold the configuration snippets, output (diff) from applied changes, validation desired_state files and compliance reports. The parent directory is deleted and re-added at each playbook run.
The base location for this directory can be changed using the ans.dir_path variable.

All roles are structured around the principle of taking the inventory and role specific variables and generating per-device configuration snippets using the roles template. The service roles pipe the variables through a filter_plugin (python) to create a new data model which is then used to render the template and build the configuration file. The idea behind this is to do the majority of the manipulating of the variable data in the plugin and abstract a lot of the complexity out of the jinja templates. This will make it easier to create new templates for different vendors as you only have to deal with the device configuration rather than the data manipulation in the templates.

Using the Ansible assemble module the config snippets generated by the individual roles (.conf) are joined together into the one configuration file (.cfg) that is then declaratively applied using Napalm replace_config and the differences saved to file. There are various other deployment options such as verbose output, dry runs rollback and merging the configuration which can be enabled using Ansible tags at playbook run time.

A validation file is built from the contents of the var files (desired state) and compared against the actual state of the devices to produce a compliance report. napalm_validate can only perform a compliance check against anything it has a getter for, for anything not covered by this the custom_validate filter plugin is used. This plugin uses the same napalm_validate framework but the actual state is supplied through a static input file (got using napalm_cli) rather than a getter. Both validation engines are within the same validate role with separate template and task files.

The results of the napalm_validate (nap_val.yml) and custom_validate (cus_val.yml) tasks are joined together to create the one combined compliance report.

MLAG is the one thing that seems to be vendor proprietary and goes against the multi-vendor design goal. I did plan to look into the EVPN implementation of MLAG (have seen Arista examples) but never got round to it. I have only used Cisco (vPC) so am not really aware of the technology and terminology of other vendor MLAG implementations. I am hoping that the same principles are used by all vendors so have tried to make the MLAG variable names as generic as possible.

It using a Python virtual environment change the Napalm library and plugin locations in the ansible.cfg to match your environment. The forks parameter has been set to 20 to cover the maximum size of deployments and stdout_callback and stderr_callback changed to try and make the Ansible CLI output more readable.

There are four main types of passwords used within the playbook variable files.

When starting this project I used N9Kv on EVE-NG and later moved onto physical devices when we were deploying the data centers. vPC fabric peering does not work on the virtual devices so this was never added as an option in the playbook.

As deployments are declarative and there are differences with physical devices you will need a few minor tweaks to the bse_tmpl.j2 template as different hardware can have slightly different hidden base commands. The system nve infra-vlans command is required for infrastructure VLANs (OSPF over vPC peer link VLAN) and to run VLXAN over a VLAN but is not supported on N9Kv. For physical devices this line needs unhashing at the start of bse_tmpl.j2 template.

Although they work on EVE-NG it is not perfect for running N9Kv. I originally started on nxos.9.2.4 and although it is fairly stable in terms of features and uptime, the API can be very slow at times taking upto 10 minuets to deploy a device config. Sometimes after a deployment the API would stop responding (couldn’t telnet on 443) but NXOS CLI said it was listening. To fix this you have disable and re-enable the nxapi feature. Removing the command nxapi use-vrf management seems to help to make the API more stable.

I moved onto to NXOS nxos.9.3.5 and although the API is faster and has more stability, there is a different issue around the interface module. When the N9Kv went to 9.3 the interfaces where moved to a separate module, module 1.

Once I get past five NXOS devices the interfaces module becomes unstable on the new devices, either randomly crashing or going into the pwr-cycld state at startup after the initial bootup tests.

I have not been able to find a reason for this, it doesn’t seem to be related to resources for either the virtual device or the EVE-NG box.