Information on how applications are identified by App-ID and following sessions and traffic flows through the firewall using the CLI.

Based on the first TCP packet received (SYN) an application will be marked as incomplete as it can not be detected until at least one data packet traverses the device. App-ID will go through several stages to identify just what something is.

Throughout the life of a session, the identified application may change several times as more info is learned from the session through inspecting packet after packet. Whenever an application shift happens a new security policy lookup is performed to find the closest matching rule. Once the App-ID process has settled on an application the application decoder will continuously scan the session for expected and deviant behavior.

In parallel to each packet being processed by an App-ID decoder the Content-ID stream-based engine applies the URL filtering policy and scans the session for threats like vulnerability exploits, virus or worm infections, suspicious DNS queries, command and control signatures or DoS attacks. This ‘in parallel’ design reduces latency meaning that enabling more security profiles does not come at an exponential performance cost.

To get the most out of App-ID in terms of application recognition the firewall should function as an SSL forward proxy and decrypt SSL traffic going to external sites. For non-decrypted HTTPS traffic the firewall can use the Server Name Indication (SNI) for URL categorization, if the client does not send the SNI then the Common Name (CN) is used (if is a wildcard the application is identified as SSL). Custom applications can be created using the SNI to control SSL traffic without the need for SSL decryption, although it is worth noting that the when the SNI is added to the TLS handshake it is not in the encrypted conversation meaning that it can be spoofed.

If an App-ID application relies on ssl and web-browsing it is extremely likely that these are what are used in the initial part of the conversation to identify the application (some applications redirect to another website, like for authentication).

web-browsing and ssl only match generic HTTP/HTTPS traffic, if the firewall determines a more precise App-ID for the traffic then it will switch to using that for determining whether to allow or deny this traffic. If traffic does not match a more specific application and is only classified as ssl or web-browsing it will be allowed by any rules with these applications in. To guard against holes in the security policy allowing unsanctioned applications need to lock down the access of these applications to specific destinations and URL categories (be it pre-defined, custom or EDLs). It is a compromise between giving enough access to recognize the applications vs allowing too much unknown ssl or web-browsing traffic.

The session table and traffic log are good places to start when trying to understand the traffic flows through the firewall.

A session is defined by two uni-directional flows each uniquely identified by a 6-tuple key of source/destination IP and port, protocol and security-zone. Each entry has a lot of information regarding the session that can not be found in the traffic logs.

Each session is identified by two uni-directional flows, client-to-server(c2s) and the returning server-to-client(s2c).

State: There is total 7 possible session states that a flow can be in. The 3 stable states represent most of the sessions seen in the session table as the other 4 transient states are shortlived and used during the transition to one of the stable states.

Under normal conditions each state will go through the transition cycle of INIT > OPENING > ACTIVE > DISCARD/CLOSING > CLOSED > FREE. From the FREE state the session will move back to the INIT to start the next cycle.

Type: There are also five session types of which the two most common seen in the session table are FLOW or PRED.

Flags: Information related to the type of NAT used. A flag with an asterisk (*) indicates that the session was decrypted.

show session all filter nat [source | destination | both | none]

Individual sessions show a lot of additional information regarding the traffic flow, some of more interesting fields are:

The session table is viewable in the GUI under Monitor » Session Browser, it can be exported and saved to PDF or CSV. 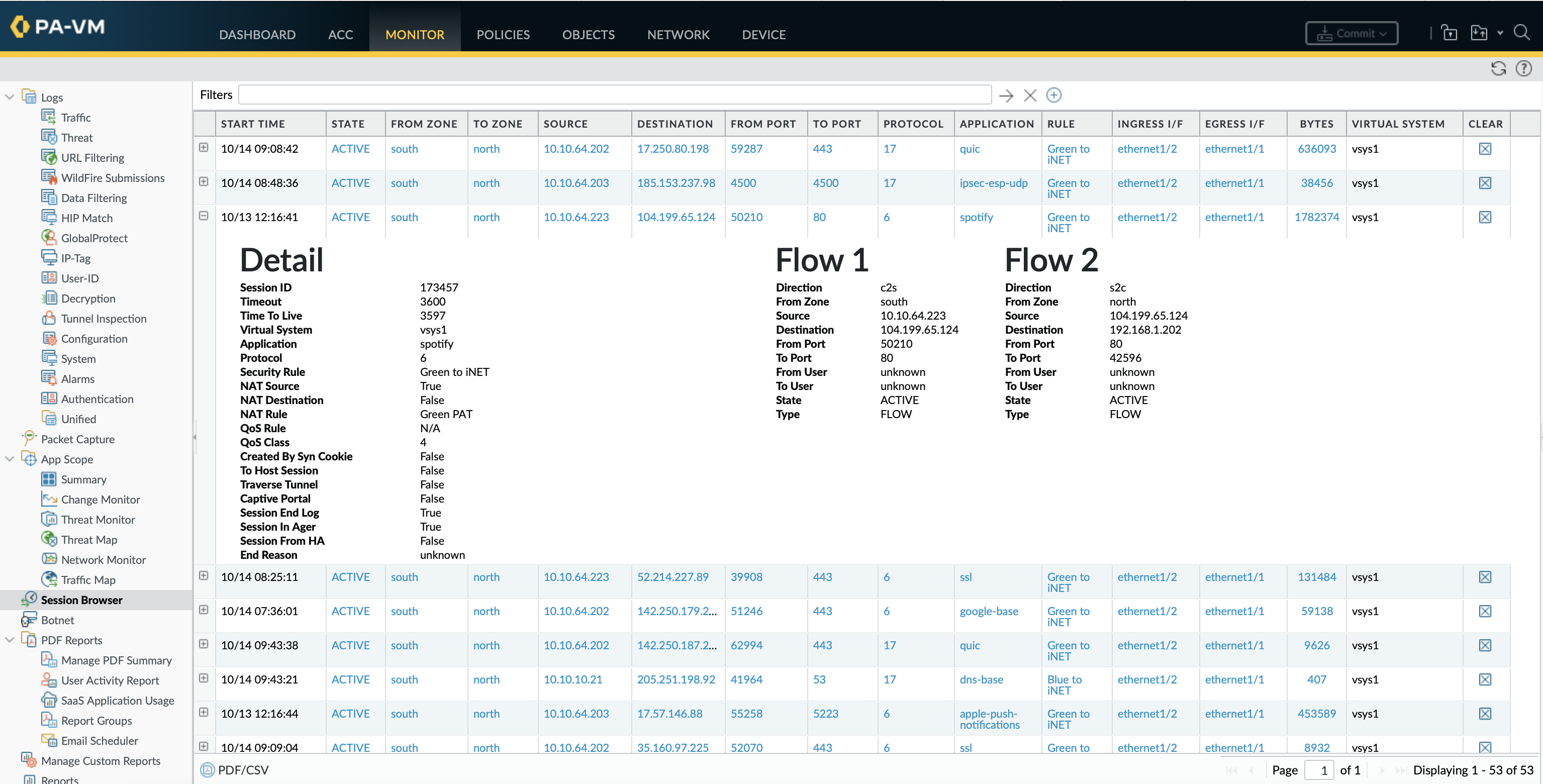 If a network connection failure can not found in the traffic log it is worth checking for DISCARD sessions in the session table.

Forcibly terminating a session will immediately set the sessions state to INIT so that any packets still arriving on the firewall will not have a session to match against meaning that they are either discarded as non-SYN TCP or evaluated as a new session. The CLI seems more flexible than the GUI (done under Clear column) for clearing sessions as sessions can be cleared based on the same filters used to view sessions.

For each sessions log action (start or end) a traffic log entry is created that includes the standard 6-tuple Key (source/destination IP and port, protocol and security-zone), users, the application (or lack of), bytes, packets and the reason for the action applied by a security policy.

When viewing in the CLI the majority of filter options can be chained together. Adding csv-output equal yes displays the output in csv format.

It is best to limit the generated output to a specific time-frame as a too broad a filter makes it slightly laggy.

Action: The action that was taken for the session

Session-end-reason: The reason a session terminated. If their are multiple causes it only displays the highest priority reason (the explanations below list these in order of priority)

show-tracker equal yes includes the reason why a the session was closed (Session Info), this is show as the tracker stage firewall in the session table.

The traffic log is one of the many log databases that can be viewed under monitor » log in the GUI. All log entries have a magnifying glass to the left of them which opens a detailed log of the session that includes NAT information and the flags applied. The table at the bottom is a clickable list of related log entries from other log databases such as vulnerability, URL filtering or end (traffic log entry created by log-session end). 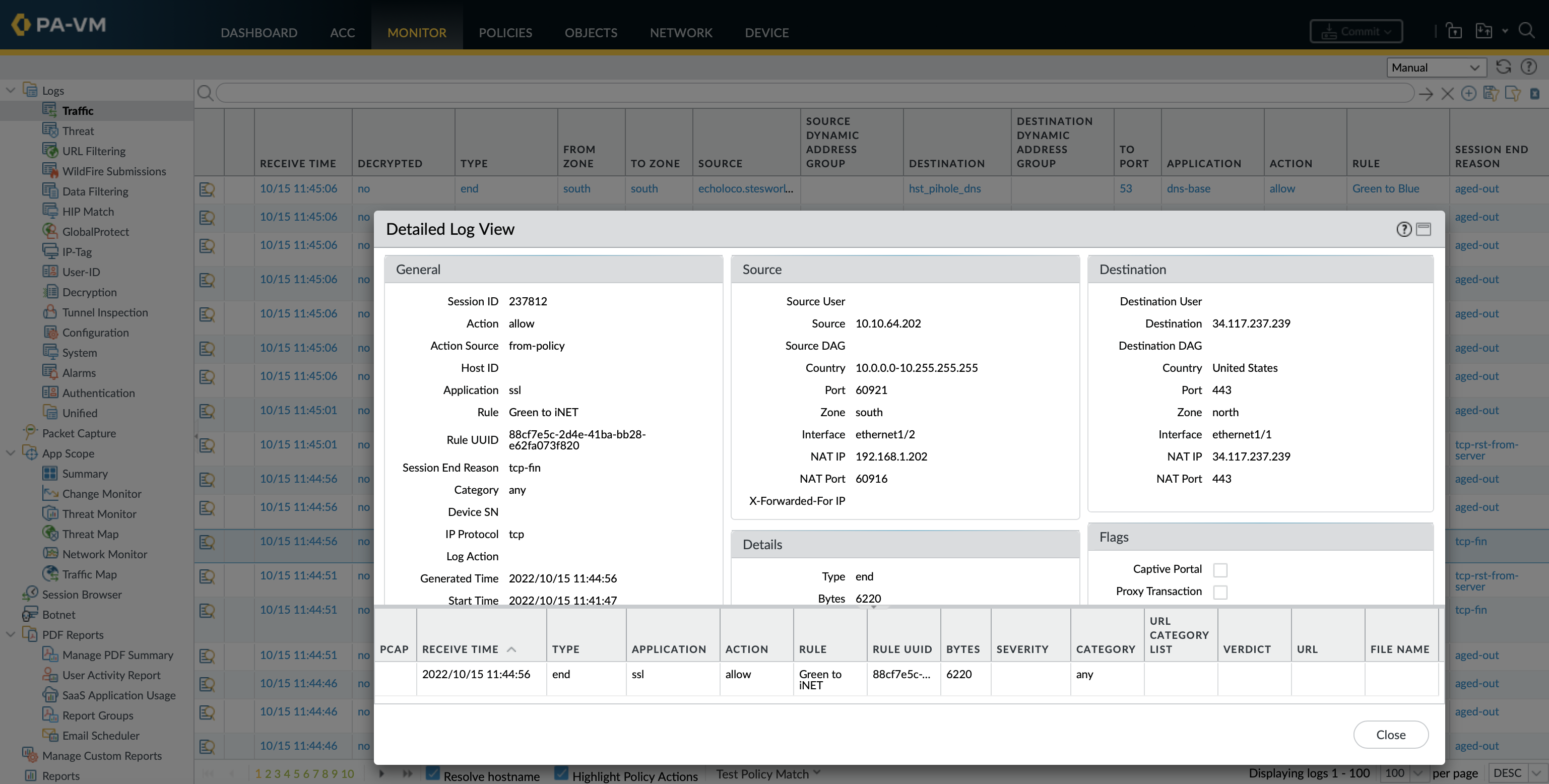 The same RegEx queries used in the GUI can also be used in the CLI to filter the traffic log.

In the top left of the GUI from right to left there are icons for add filter (filter builder), save filter, load filter or export to CSV.

A good article on using cli to view counters to track packets through firewall
Palo KB articles on sessions and the session tracker feature
Fairly old but still relevant, some great troublehooting tips and commands from itsecworks in part1 and part2

Mastering Palo Alto Networks by Tom Piens is a well formatted book to get started and find more in depth info on Palos, there are some handy cheatsheets on the the books github page